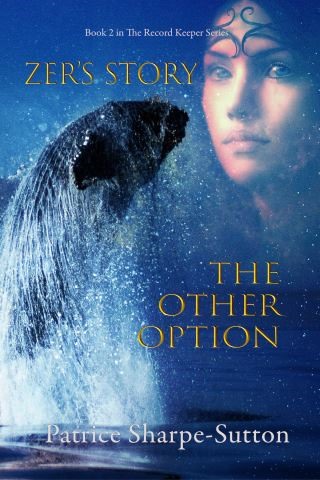 Zerera and Felice, a hermaphrodite Exotica tree that Zer planted, arrive in Prescott to properly introduce Zer and other Zenobians, in part to warn them of radiation fever. Zer meets newborn human babies; these babies are more evolved or enlightened than their parent’s generation. During the rad fever, Zer helps the Prescott, gypsy, and Beastie people; she has become visible to them. She also visits a Hoover shaman to learn about herself and her role in the new agenda for all Earthling species. She goes into isolation and learns other ways of being on Earth. Zer tries to cooperate with the Earthling Karen. But each holds to a different old mindset. Each stands in the way of fulfilling an ancient experiment between Earthlings and Zenobians. Once the Prescott community is stabilized, Zer and Ian seek Lila, the Woman Who Knows, to find out more about the new agenda for Earth. After learning from Lila and astral, or dream, traveling together many times, Zer and Ian hike to the pyrid at Sunset Crater, so Ian can study in the Zenobian library for material for his book; then they return to Hoover village and go their own ways. Since Zer’s purpose (to train Exotica saplings and to establish rapport between Exotica and Earthlings) has ended, Zer goes into exile or isolation, during which she learns from a cougar to track Rogue humans and their Exotica tree companions, and learns the culture of individualism; they return to the pyrid so the cougar can be artificially impregnated. They travel to the coast to meet saplings the Beasties planted in the hills; Zer is charmed. When Zer hears of danger on the wind, she and the feline rush back to the pyrid at Sunset Crater, where Zer uses her telepathy to direct militant Rogues to the area of the pyrid craft where EM rays will indirectly make it possible to repair scrambled nanocodes in their brain implants. Though Zer refuses to work in person with the militant or ex-military Rogue humans with faulty nano-brain implants, she does psychically explore the psychological aspect. She and the cougar then hike to the felines den at Mount Lemmon, where Karen lives. Karen’s not there, but inside a mountain cavern, Zer has a revelation about her parents and Karen’s father. Back at Hoover village, Zer and Ian decide to return to Prescott. After they arrive, the radiation fevers spreads throughout the community. The fever causes new perceptions as do newborn humans and Beasties. After that, Zer and Felice go to the Sups’ sap rising festival where Carali, one of the trio Zer planted, is torn apart. Zer and Karen meet again and their relationship changes in a peculiar way. The next time they meet, Zer has to enter Karen’s body to help her. Eventually, they work together to build Oracle playground, a portal for Earthlings to gain new awareness and experiences of reality. Before that, Karen also spends time in Tuc’s jail, helps fight Rogues, and helps free her mother and newborn sister from Tuc colony. Also before that, Zer and Ian track down the last Rogues and Brea who stole the cougar’s two cubs. Finally, Brea challenges Zer to master herself. When she does, she chooses to honor Earth and connections to Earth.

Patrice Sharpe-Sutton: The author had explored spirituality for nearly 20 years when the Muse or Spirit or maybe an alter ego in another universe, not only inspired a story but named the main character Zerera. It sounded like "new era" to her, since the story occurred on Earth after a natural disaster and Zerera came to Earth from another galaxy. Just after the story was inspired, the author started a master's degree program in the humanities, which had her wondering what a bi-galactic citizen would be like. The what if was added to the story; then the outline and brief passages she'd written were put aside until 1996 when she wrote it full out. Her younger sister had died. Life seemed short. But the story was set aside again, till now.